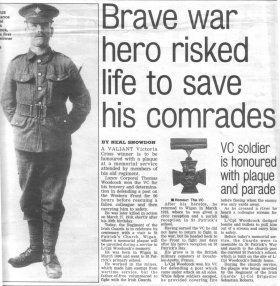 A VALIANT Victoria Cross winner is to be honoured with a plaque at a memorial service attended by members of his old regiment.

Lance Corporal Thomas Woodcock won the VC for his bravery and determination in defending a post on the Western Front for 96 hours before rescuing a fallen colleague and then carrying him to safety.

Today, the Regiment of the Irish Guards is to celebrate its centenary with a visit to St Patricks Church, Wigan, where a memorial plaque will be unveiled during a service in L/Cpl Woodcocks memory.

He was born in Wigan in March 1888 and went to St Patricks primary school.

He worked in the mines, which made him exempt from wartime service, but the father-of-free volunteered to fight with the Irish Guards.

After his heroics, he returned to Wigan in March 1918, where he was given a civic reception and a parish reception in St Patricks school

Having earned the VC he did not have to return to fight in the war, but he headed back to the Front to fight just days after his heros reception on St Patricks Day.

His grave is in the British military cemetery at Douchy-les-Ayette, France.

L/Cpl Woodcock won his VC for defending a post which came under attack on all sides. While fellow soldiers escaped, he provided covering fire before fleeing when the enemy was only yards away.

As he crossed a river he heard a colleague scream for help.

L/Cpl Woodcock dodged bombs and bullets to pull him out of a stream and carry him to safety.

Before todays memorial service, the Guards were to assemble in St Patricks Way and march to the church past the current St Patricks school, which is built on the site of L/Cpl Woodcocks family home.

During the church service, the plaque was being unveiled by the Regiment of the Irish Guards Lt-Col Brigadier Sebastian Roberts.

Back to News Clips Contents